Background
As a person of African heritage being African has never been a question or an
identity issue for me. However as the world has evolved and changed, moving
around has become the new norm and easier and meeting people of other
ethnicity and intermarriages is now at an all time high. As a result more and
more people have began to develop questions about who they are and to be
African or not to be African is the question.

What is Africa, really?

Africa was the birthplace of the human species between 8 million and 5 million years ago. Today, the vast majority of its inhabitants are of indigenous origin. People across the continent are remarkably diverse by just about any measure:
They speak a vast number of different languages, practice hundreds of distinct religions, live in a variety of types of dwellings, and engage in a wide range of economic activities.

What and who is an African?

I came across an interesting article that tries to explain nationality from a philosophical perspective and explained the following. In general to be a national is to be a member of a state. Nationality is acquired by birth or adoption, marriage, or descent (the specifics vary from country to country). Having a nationality is crucial for receiving full recognition under international law. The above quotation does help us to understand nationality however there are many loopholes in terms of identifying whether a specific individual feels that they are the nationality that they possess. It does sound quite confusing but imagine your great parents are Indian and they migrated and changed their
nationality to Zimbabwean-Indian, and you are born and raised in Zimbabwe but you have an Indian appearance. You’re, born and raised as a Zimbabwean and even speak Shona quite well but you are not quite Zimbabwean. Does that then make you Zimbabwean or African at all? If at all you are reading this article and have gone through this kind of identity issue and if you want to share how you came up with an answer to the question “To be African or not to be African.” Do reach out to me at nichole@getfundedafrica.com and lets discuss.

When the answer is “Not to be African”

You just landed in a foreign country abroad as an African abroad in search of greener pastures on the other side of mother earth. You send out resumes and you land 20 job interviews. In your head you think how amazing this is and
create scenarios of how you will go on the job interview “date(s)” and then finally pick that one true “love” which is going to be your new job. You go for 15 of the interviews one after the other and pick up on something that you
may have never came across before in your home country and discover discrimination. Your heart is broken and you question whether giving a different answer to the question “Where are you from” could change the playing field for you. What would you do when the answer to the question “To be African or not to be African” is “not to be African?” If you have come across this as an African abroad how did you handle it? Send me an email at nichole@getfundedafrica.com

When the answer is “To be African”

Africa, the second largest continent in the world, is rich in geographic and cultural diversity. It is a land populated by peoples with histories dating to ancient times and cultures shaped by innumerable tribes, languages, and traditions. Because it is the birthplace of Homo sapiens and the land of origin for much of the world’s population, the culture of food and eating in the different regions of Africa is important to people throughout the world. A very popular editor that works with the blog okayafrica.com commented on an interview that Prince Harry and Duchess Meghan
had with the Queen of Talk Oprah Winfrey, she wrote.

The interview confirmed something I’ve always felt to be true —
that there are very few places where Black people can be Black in peace.
Whether we like it or not, we Black people are a collective community under a system that actively works to
dismantle our Blackness.
No matter how palatable some of us may think our Blackness is, there is no escaping the unmitigated gall
Black bodies attract.

In my personal opinion it is hard for any individual to be denied the privilege of embracing their identify regardless of how they may appear.

Doing research for this article led me to discover the term code switching. Which is a term that I had initially never heard of before but I can relate to. Code-switching involves changing from one way of speaking to another between or within interactions and includes changes in accent, dialect, language (Martin & Nakayama, 2010). Codeswitching can also refer to the process of multicultural individuals using more than one language in conversation or other communicative acts (e.g., gestures, body language, and understood contexts).

There are many reasons that people might code-switch. There has been cross-cultural research indicating that an accent can activate stereotypes and change perceptions (Bourhis, Giles & Lambert, 1975; Dixon & Mahoney, 2004).

Picture this
You have been living in the city for 5 years and need to visit family and deliver the groceries for the month. You arrive at the village and one of the neighbours greets you. You have two options you can either reply them in your local dialect or reply them in one of the colonial languages in your country. You stop for a minute to deliberate, in the village people who live in the city are seen as people that have a considerable amount of wealth, boujee and pretentious compared to the rest of the people that live normally in the village therefore they may try to charge you a little extra or try to get you to leave expensive “gifts”. You are obviously fluent in both and decide to go the local language route. A minute later you receive a phone call from your boss to ask you about the meeting you had before you left. In this conversation you have to be professional, and you would use your colonial language. This is a classic case of code
switching.

So the answer to the article question seems to be a personal choice and it is different for all individuals in many situations. Code switching as made it possible make the answer a little simpler. 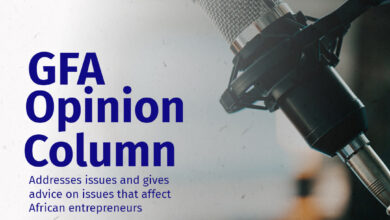 GFA Opinion: Reasons Why Investors Will Not Invest In Your Start-up (For The African Entrepreneur) Part 1